Mr. Yasuhiro Minamizawa was born in Shiga, Japan.
In 1986, Minamizawa experienced Indian classical music in the holy place Varanasi for the first time, and started his education on the Sitar, string instruments, and the theory of Indian classical music under the tutelage of Dr. Shrawani Biswas.
He then relocated to Varanasi and continued musical studies under his mentor’s supervision for several years, and with his teacher's recommendation he started to perform live in concert in India and Japan.
His raisonne includes not only classical Indian music, but also a variety of musical and avant garde spiritual dance theme genres at multiple performing arts venues including temples, galleries, and auditoriums.
In 1995, he became a founding member of 'Tenkoo Orchestra', a well recognized group in Japan and internationally, famous for its 'tribal rock' style of music performed by mostly tribal instruments.
While with the 'Tenkoo Orchestra' he played the sitar at the 'World Jazz Stage' and at the 'Avalon Stage' in the 'GLASSTON BURY FESTIVAL' in UK in 1998 and in  'Green Future's Field' at the same festival in 1998 and 2000.
In 1999 and 2002, the 'Tenkoo Orchestra' performed at the 'FUJI ROCK FESTIVAL', the largest festival in Japan, in front of five-figure audiences each year.
'Tenkoo Orchestra' has released five CD’s in Japan to date and all of them have been and still being re-produced for distribution.
In Germany, one of their CD's, 'Heaven in the KOO', was released by IC/digit music GmbH., BFM87 4021-2, in 1997.
As a concert soloist, he also performs Indian classical music in numerous venues, especially at Japanese SHINTO* shrines, and at Buddhist temples such as TODAIJI in Nara,Honen-in in Kyoto, etc.
His sound from the sitar instrument renders a 'spiritual resonance' that only a skilled technique can generate.  At his soloist concert performances, most of the audience was enchanted by the spiritual resonance and felt a 'spiritual unity', as he wishes whenever he plays the sitar.

*SHINTO  is the way of the gods, based on respect and awe of natural phenomena, the sun, moon, weather, mountaintops, trees, rivers, which are considered to contain their own gods (Kami). 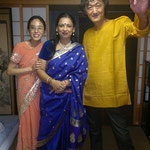 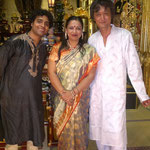 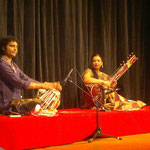 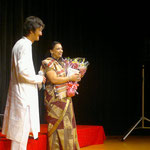 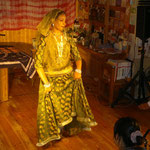 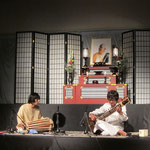 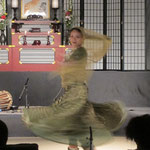 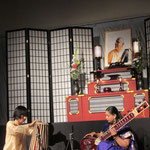 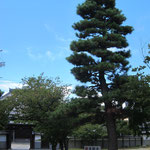 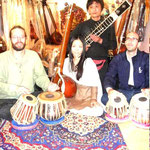 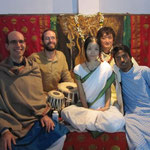 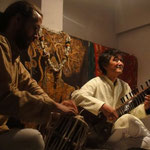 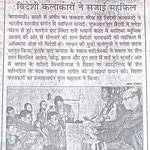 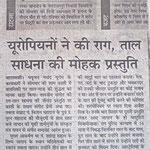 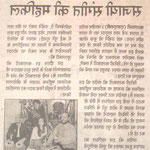 
SANMAARG
Japanese artist Yasuhiro Minamizawa astounded everyone with his rendition of Raag Puriya Kalyan on sitar. In this raag, he firstly played alap, jor, jhala, and then with compositions (gatkaari) in Teentaal completed a successful programme. The purity of the notes was praiseworthy in his performance. With him, Australian artist Shen Flindell, giving close accompaniment (saath-sangat) on tabla with complete maturity, made the programme attractive to the ear.

At Dhrupad Tirth, amidst the burbling of local listeners taking their places, the programme began with a classical opening by foreign (videshi) devotees of Indian (desi) arts. Japan's Yasuhiro Minamizawa's fingers bent his sitar's strings and then Australia's Shen Flindell's fingers beat upon the tabla with him. Seeing both of the foreign(videshi) artists' great skill in Indian (desi) arts, we were quite astounded and received quite some enjoyment/bliss.

The programme began with the sitar playing of Japanese artist Yasuhiro Minamizawa. With his sitar's strings resounding in Raag Puriya Kalyan, he gave inspired emotions to everyone. He was accompanied on tabla by Shen Flindell from Australia.

The programme was "opened in the name of Sri Ganesh" with the sitar playing of Yasuhiro Minamizawa from Japan.He tuned his sitar's strings in Raag Puriya Kalyan. He was accompanied on tabla by Shen Flindell from Australia.